The Power of a Political Union 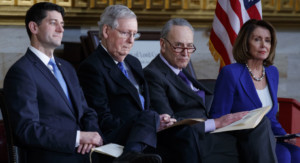 The leadership of both political parties have become corrupt – corrupt in the sense that they have higher priorities than the welfare of the United States and her people. Whether these higher priorities are because of personal greed, peer pressure, a desire to appease the media, or a misguided allegiance to a global agenda, they are no longer representing the will of the American people.

We label this corrupt, elitist faction (of both parties) as the Ruling Class.

Their ongoing disregard for the general welfare has resulted in a popular rebellion by the people. In the Democrat Party, the leftist/socialist/authoritarian faction is the source of rebellion. In the Republican Party, it is the traditional American values/Constitution-based/ freedom-loving faction. This resulted in Donald Trump being elected President of the United States.

The Ruling Class and socialist left are well funded by many multinational corporations and globalist billionaires. This massive financing allows them to manipulate public opinion via the media, our educational system, Hollywood, and NGOs (non-government organizations).

Those of us that are traditional Americans are accused of being unsophisticated hicks and are made to feel as if we are overwhelmingly outnumbered.

But it is not true.

We are the majority of Americans – we’re just not organized. Our President is only being obstructed because Republican Leadership is not fully committed to supporting him.

We don’t need a third political party (it wouldn’t work)… and for the foreseeable future, the Democrat Party is a lost cause… the only viable solution is to retake control of the Republican Party.

When workers in the Industrial Revolution were being abused by management, they organized into unions. This gave them the political clout and war chest to force change in management. In much the same way, we can organize against the Republican leadership and force them to either support President Trump or be removed from office in the next Primary Election.

The Primary the Ruling Class movement (PRC PAC) is dedicated to this cause. We are a registered Political Action Committee that is functioning as a Political Union. Our growing membership each pay nominal dues to grow a war chest, and our numbers create a potent political force to exercise organized political clout.

To our knowledge, we are the only organization of our kind and we are seeking not only new members but also part-time and full-time organizing members (with compensation).

The word is getting out – tens of thousands have already heard about PRC PAC via internet and nationally syndicated radio – if you are a doer (and not just a talker) – if you are ready to stand up for your country – contact us to learn more.